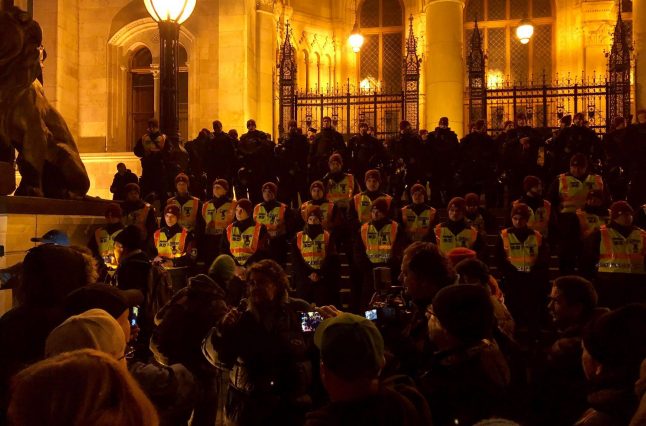 NATIONAL HOLIDAYS DO NOT GIVE THE GOVERNMENT AN EXCUSE TO SHUT OUT OPPOSING OPINIONS!

The government has submitted an amendment proposal that would exclude protests from the most important, symbolic public squares of Budapest during national holidays. Furthermore, it would empower local governments to remove further areas a no-protest zone.

Freedom House published this year's evaluation examining post-socialist countries on Tuesday. The report, Nations in Transit 2015, reclassifies Hungary from the category "Consolidated Democracies" to "Semi-Consolidated Democracies." The Washington-based international watchdog organization examined 29 countries (in Central Europe, the Balkans and the member states of the former Soviet Union) during last year. In the report, Hungary ranked 8th among 29 countries, finishing behind Slovakia and ahead of Bulgaria.

Churches Deprived of Liberty Await Compensation from the Hungarian Government

The Hungarian government has failed to reach a satisfactory agreement on compensation with nine disenfranchised churches, leaving the matter to the European Court of Human Rights to decide.

The Hungarian Civil Liberties Union is representing the gay dating site melegrandi.hu in proceedings before the Equal Treatment Authority. The site was going to place ads on buses managed by the Budapest Transport Company (BKV), but was denied by the company responsible for BKV's advertisements, claiming that advertising regulations prohibit ads that threaten the moral development of children and minors. HCLU says this interpretation is totally missing the point of the concerned paragraph of Hungary's advertisement law, and the denial constitutes an infringement of equal treatment rights.More:http://tasz.hu/hirek/tasz-kepviseli-melegrandihu-t
Bővebben »

The Hungarian public education system has fundamentally changed due to the 2011 adoption of the Act on National Public Education and other related legislation. Considering the severe infringements of children's rights and the curtailing of the autonomy of teachers and institutions, the Hungarian Civil Liberties Union has decided to extend its legal defense activities to this field as well. In the framework of its Freedom of Education Program, the NGO provides legal advice and representation free of charge.More:http://tasz.hu/hirek/elindul-tasz-tanszabadsag-programja
Bővebben »

Hungary's Government Has Taken Control of the Constitutional Court