Read a report about our campaign for opening supervised injection sites in Budapest - and watch our campaign movie with English subtitles! 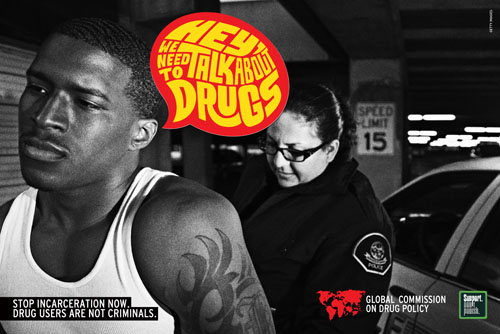 International organisations invited NGOs to participate in the 2014 Global Day of Action on June 26, to raise awareness of alternatives to punitive drug policies. Answering the call, we launched the “Room in the Eight” campaign in Budapest. We worked with the PR firms Urban Communications and White Rabbit, to provide us with technical assistance on graphic design, advertising and on-site campaigning. The aim of the campaign was to educate and mobilise the general public, especially residents of the Budapest 8th district, to support innovative harm reduction solutions as alternatives to criminalisation. The goal is to keep harm reduction on the agenda of political decision-makers, and open the first supervised injection facilities in the city.

Since 2006, the Blue Point NGO had been providing clean needles and syringes for the most marginalised injecting drug users in one of the most impoverished neighbourhoods of Budapest. This was the largest needle and syringe program, having reached out to more than 3,000 clients, most of them unemployed and living in poverty. The local mayor and his team accused the program of “attracting drug users to the district”, and blamed them for the presence of drug litter on the streets. Despite the first officially registered HIV transmissions among local drug users, the NGO was forced to shut down their service by the end of the summer. (To learn more, read our detailed article!)

The local mayor has been trying to convince local residents that the solution is to close down needle exchange programs, and rely on law enforcement to eliminate drug use. We would like to convince people that the real solution is not less, but more, harm reduction.

We realised that there was a significant gap between the real public health harms of the open drug scene, and the harms perceived by local residents. For example, local non drug users are much more concerned about drug litter on the street, than about drug users sharing injecting equipment. In reality, the chance of someone getting infected by touching a used needle on the street is minimal, whereas the risk of transmission from sharing injecting equipment is huge. We needed to communicate our message in a way which would appeal to most audiences, especially to those who live in the neighbourhood.

We therefore stressed the beneficial effects of harm reduction services on the harms perceived by local residents: the presence of unofficial shooting galleries, drug litter on the streets, and nuisance caused by street drug use. The solution we proposed, was to create a safe, hygienic environment for drug users to inject their drugs, using sterile equipment – that is, to open supervised injection rooms in the 8th district (“Room in the 8”). This is beneficial, not only for drug users (by reducing the incidence of blood-borne infections and overdoses), but for non-users as well, by reducing the prevalence of street injection and getting rid of unofficial shooting galleries.

We created a campaign website to communicate this message, with various multimedia contents, including the campaign movie (see below). The website explains problems and solutions in relation to the open drug scene, via three short thematic videos: one on the risk of HIV and hepatitis C infections; another on the growing problem of drug litter on the streets; and a third about harm reduction solutions from other places, for example, Vancouver, Switzerland, Australia, and Denmark. The website encourages people to sign the online petition - which addresses decision-makers in the local, municipal, and national governments, by proposing a comprehensive package, a four-pillar strategy, including prevention, treatment, harm reduction and smart policing. In addition to the petition, there are links to connect visitors to social media pages (Facebook, Twitter) and to Drugreporter. Our online petition was signed by 2,000 people during the first week of the campaign, and the number of signatories now exceeds 5,400.

We produced a twenty-minute campaign film, featuring people who use drugs, professionals, and local residents. Our video crew followed the street outreach team of the Blue Point needle exchange, and we interviewed people in the neighborhood of the centre. With the help of a drone hellicopter and our GoPro camera, we produced aerial footage of the 8th district, and used segments from our video about Insite, (the supervised injection site in Vancouver), to contrast the hygienic, safe environment of a consumption room, with reality on the Budapest streets. The movie does not attempt to gloss over the fears and problems of local residents, but it offers effective solutions. We advertised the video with a short trailer. Our video got 20,000 views in the first week, and by August, that number had reached more than 80,000. It has been featured, with our embedded links, by several online news sites. Watch the video below!

On June 26 we invited the citizens of Budapest to an open forum, located at MÜSZI, a community centre in the 8th district, where we gave the first public screening of our campaign movie. Following the screening, we had a round-table discussion, with a client of the needle exchange centre, professionals, and a non-drug-using resident. The forum was moderated by Krisztina Bombera, a well-known television journalist, who fronts a talk show on ATV, a news channel. A number of local residents showed up at the forum and showed support to our campaign. Unfortunately the local mayor did not accept our invitation - only opposition politicians came, and spoke up in support of our initiative. The room, with a capacity for 200 people, was almost full, and media interest also exceeded our expections. (A photo gallery of the event!) 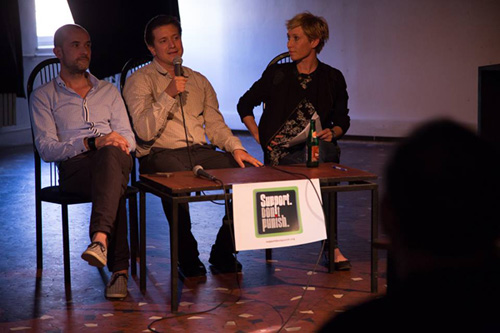 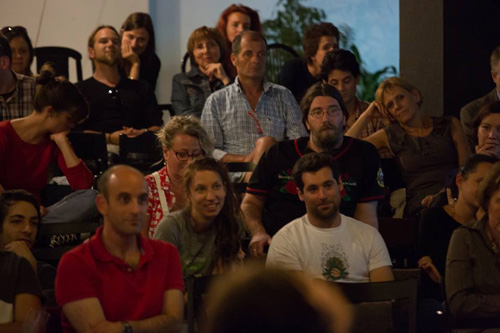 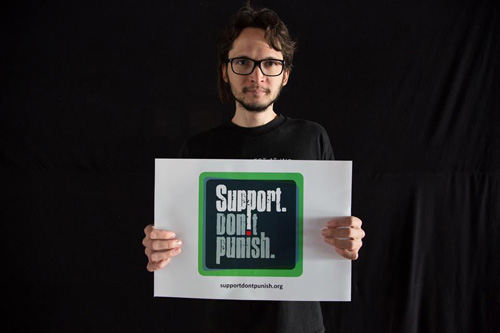 To maximise our media impact, we had an agreement with 444, a major Hungarian online news site, to publish our film as a leading article, the day after our campaign event, on World Drug [Awareness? jld] Day. In addition, we distributed a press release among journalists in Hungary, to raise awareness of the campaign. We contacted several key journalists personally. The campaign was featured by the Evening News of one of the most popular commercial TV chanels in Hungary, RTL KLUB. This Evening News has almost 1 million viewers. We were invited to ATV Start, a talk show of another TV chanel with national coverage, ATV. We were interviewed by radio shows (for example KlubRádió) and by a weekly magazine, Magyar Narancs. Many other printed and online newspapers wrote about the campaign, some of them embedded our campaign movie to their news articles, or using our footage for their own videos. We distributed videos and images on social media as well. 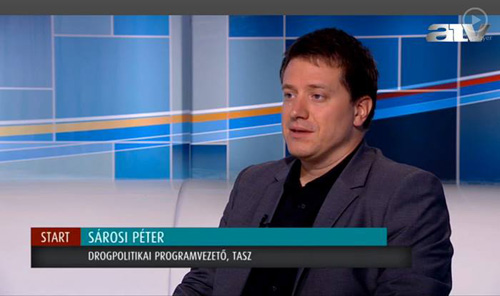 We got a lucky offer to use 'citylight' ad surfaces for a reduced price. Citylight is a construction with internal illumination (a thin light panel, mounted on its own stand) with the format of advertising filling 1.2 x 1.8 meters. We installed citylight ads in 10 locations within the 8th district, in areas with heavy pedestrian traffic. The central message of the posters reads “Use your signature to support a city free from drug litter”, and the explanation below: “Join our campaign for a city where drug users inject in a safe and hygienic room, not in your doorway”; and on the bottom of the poster, a short message, with “Support. Don’t Punish”, and the link to the campaign website and petition. 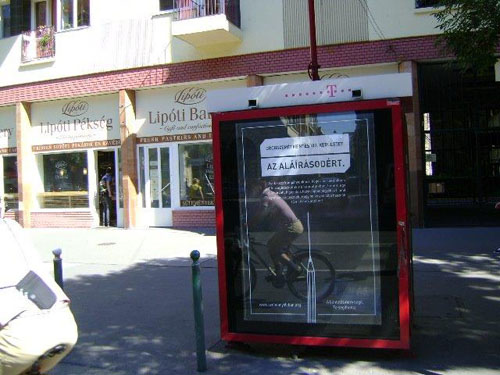 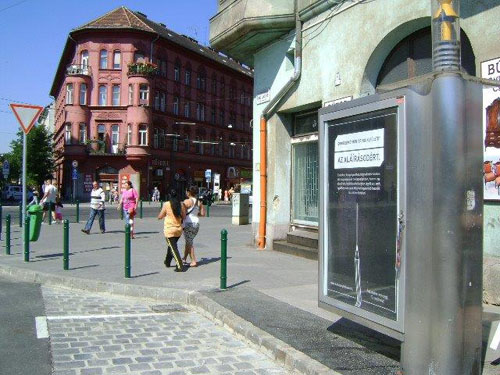 We set up two posts to collect signatures among residents in the 8th district, one in front of the administrative office of the municipality, the other at the entrance to the covered market – both areas which are frequented by people all day. For one week, we collected signatures every day, from 8 am to 6 pm, with the help of hostesses and volunteers. Beside collecting 1,742 signatures, this also provided an ideal opportunity to discuss campaign issues with people. 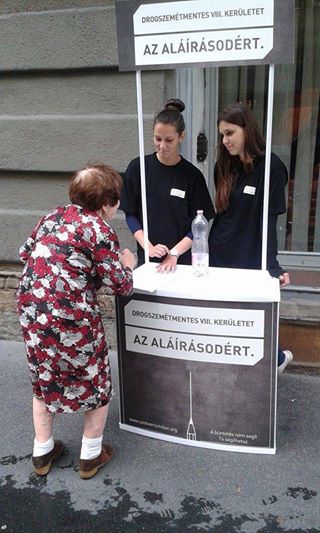 Few advocacy opportunities for civil society exist under the current anti-democratic Hungarian regime. We launched our campaign in a very hostile political environment, seeking to target people who were either indifferent to harm reduction, or who were actively opposed to it. We sent the petition to decision-makers. The State Secretary at the Ministry of Human Resources sent us a letter, in which he assured us that the government is committed to finding a harm reduction solution, but they do not support the opening of an injection site. Negotiations are underway between civil society and the Ministry, to create a special fund to scale up harm reduction in the 8th district. The Mayor and his office did not officially respond to our letter and refused to engage in a dialogue. Some local opposition politicians responded positively, and accepted our call to put the campaign on the agenda of the City Council. The campaign was highly effective in mobilising people for the cause of harm reduction, raising public awareness of the risk of infections and the closure of the syringe exchange program, and generating media attention and public discussion.

AT A CROSSROADS: Will Serbia Fund Harm Reduction Programs to Save Lives?

Serbia is not eligible for any more money from the Global Fund - harm reduction programs are in danger. Our movie gives you a glimpse of the desperate situation of Roma injecting drug users in Belgrade, help us to share the message!

Ruth Dreifuss, the former president of Switzerland points out that time has come to a broader understanding of harm reduction, beyond public health - watch our video!