In 1976, the Netherlands separated the cannabis market from the market in other illicit drugs, and allowed coffee shops to sell small amounts of cannabis to adults in a controlled environment. Our new movie, supplementing the report of the Open Society Foundation, tells the story of the Dutch model and highlights its successes, as well as the challenges ahead of it.

Coffee shops that sell cannabis are going through difficult times in the Netherlands: their number is shrinking because of new bureaucratic rules that make day-to-day management harder. The coffee shop, 'Wow', is a good example in Amsterdam: its distance from the nearest school is 241 metres, just 9 metres less than that required under a law introduced in 2008. As a result, the city ordered the coffee shop to close during school hours. More than 40 coffee shops had to close down in Amsterdam, just because of this rule. Many journalists and politicians in other countries tend to interpret these changes as signs of the failure of the "liberal Dutch cannabis policy", and use them as an argument against drug reform in general: "You see, even the Dutch have realised that their approach was a failure."

The reality, as usual, is much more complex. We can observe a conservative-populist shift in Dutch politics, as in many other European countries. But this does not mean that the Dutch drug policy model is a failure – actually we have evidence that it is more successful than the punitive drug policies in other European countries, not to mention the War on Drugs in the US. Cannabis use did not skyrocket, but remained stable in Holland; more important - drug-related death and disease are less prevalent than in many countries with restrictive drug laws. This is the conclusion of the report produced by the Open Society Foundations, authored by two excelent researchers, Jean-Paul Grund and Joost Breeksema. Click on the picture to download the report! 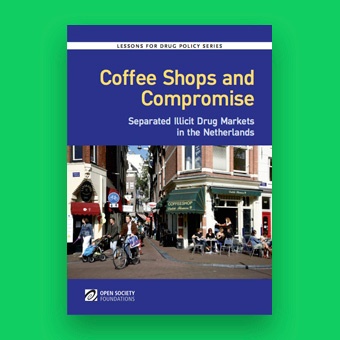 We also have evidence that the problems with regard to coffee shops, such as drug tourism, are problems related to prohibition and not to legal regulation (large scale cannabis cultivation is still illegal and this creates the "backdoor" problem). Recent measures to restrict the legal sale of cannabis have not proven to be effective in reducing the harms, but only fuelled the black market. The real solution to problems such as drug tourism and organised crime would be to create a legal, regulated cannabis market in the European Union.

Watch our video interview with the man who discovered Mephedrone, the drug also known as Meow-Meow!

While childbirth at home is accepted and legally regulated in most developed countries – In Hungary, the entire obstetrician-gynecologist profession is against childbirth outside of the institutional maternity ward. Why is this?