The HCLU's movie presents drug policies in Portugal ten years after the decriminalization of drug use - watch it and share it with your friends on Facebook!

In 2001, a small European country, Portugal, took a brave step, changing its drug policies and refocussing its efforts away from arresting and criminalising drug users, towards smart public health interventions. How did the political establishment of a Catholic-Conservative country come to such an agreement about decriminalization? How does the system work? Is it effective? Ten years after decriminalization, the HCLU film crew travelled to Lisbon and Porto to get answers to these questions – and now you can learn them from our latest movie, produced in cooperation with APDES - an NGO partner in our European Drug Policy Initiative. The film tells the story of decriminalization from various perspectives, through the eyes of people involved in its formation, implementation and evaluation.

You can turn on English subtitles by starting the movie and clicking on the "cc" button at the bottom of the window!

We recommend you to read the report of the Open Society Foundation on the same issue, please click on the picture below: 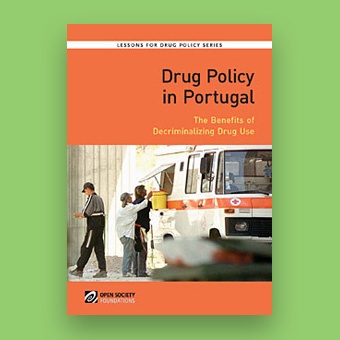 Contrary to the expectations of the new law’s critics, drug use did not skyrocket in the years following decriminalization – actually it stabilized or declined among young people, in accordance with the patterns and trends of other European countries.

What is even more important, there was a significant reduction in drug-related deaths and disease, not to mention financial and human resource savings for the law enforcement bodies. Prior to decriminalisation, Portugal was a Catholic-Conservative country with a short history of democracy, the prevalence of injecting drug use was very high, as well as the rate of new HIV transmissions.

The Portuguese experience demonstrates that decriminalisation and harm reduction programs do not only work in rich countries with well-established democracies like Holland. In addition, the Portuguese decriminalisation model did not only abolish penalties against drug users but also created a diversion system: a commission made up of three people, a doctor, a social worker and a lawyer decides if the offender should be sanctioned or not. We can now see that this model serves as an effective social filter of problematic and non-problematic drug use.

HCLU vs. Police: the trial of discrimination against Roma

On June 13, 2013 the trial of the actio popularis against the Heves County Police begins at the County Court of Eger. The lawsuit was initiated by the HCLU against the Police for discriminating against the Roma in Gyöngyöspata based on their ethnicity and skin color during and following the extremist “patrols” of 2011. At stake: will the court hold the state responsible for the discriminative treatment of the Roma?

Civil Guard Association For a Better Future: We are not patrolling but observing

Under the guise of observations "in service of the residents”, uniformed men terrorize children and harass adults based on their ethnicity or national status in Magyarbánhegyes. According to this, it seems as if police did not defend locals against persecution. (The Civil Guard Association for a Better Future with other extremist anti-Roma groups – pretending to be militiamen and vindicating the right to maintain public order – have started a systematic campaign of intimidation against the Roma for weeks in Gyöngyöspata, Hungary in April 2011. They illegally patrolled the village and provoked the Roma adults and children.The HCLU published its Shadow Report and a documentary video about the events. The summary of the Shadow Report can be found here.