Canadian activists disrupt the speech of the Health Minister of Canada, who refuses to accept the evidence that harm reduction works - watch our new video!

The Canadian Minister of Health, Leona Aglukkaq, is not popular among AIDS activists: she does not accept the evidence that harm reduction programs, like Insite, the first safer injection site in North-America, effectively reduce the risks of HIV transmissions and overdose deaths. Her Conservative government listens to fake-scientific crap instead, like papers produced by the Partnership for a Drug-Free America. She expressed her disappointment when the Supreme Court decided in favour of Insite – even if the court declared that attempts to close the clinic were “grossly disproportionate” to the benefits for drug users and the community. She is responsible for recent cuts for a federal program that provides extended health-care benefits to refugee claimants. Watch our video showing activists disrupting her speech at the AIDS 2012 conference!

Her refusal to even touch the paper on the evidence-base of Insite, delivered by activists, is a symbolic act: is she afraid that evidence is infectious? If she is, she is right. Evidence is just as infectious as HIV! The fear of evidence is a curable disease, Ms. Aglukkaq! 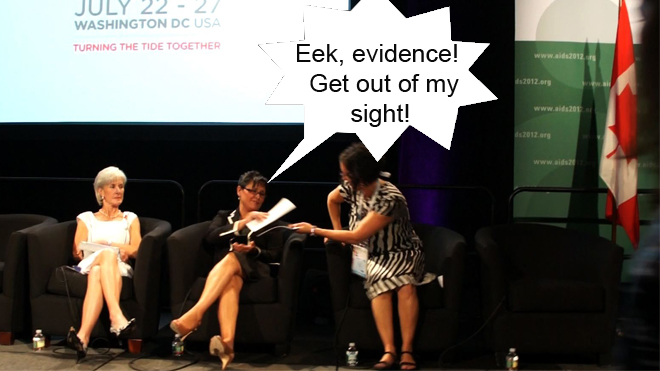 NeLP was initiated by the HCLU with funding from East-East Partnership Beyond Borders Program of Open Society Foundations. Watch and share our movie about the story of NeLP so far.

Watch the second EDPI film from Bulgaria about the pioneering harm reduction work done by our partner, Initiative for Health Foundation

The US drug czar claims his government is paving the way to a progressive, innovative and science-based drug policy - watch our video featuring his speech and read our blog!